The Blue Bum Painting above was shown at The Baseball Reliquary exhibit “Not Exactly Cooperstown” at the Burbank Central Library in August and September. 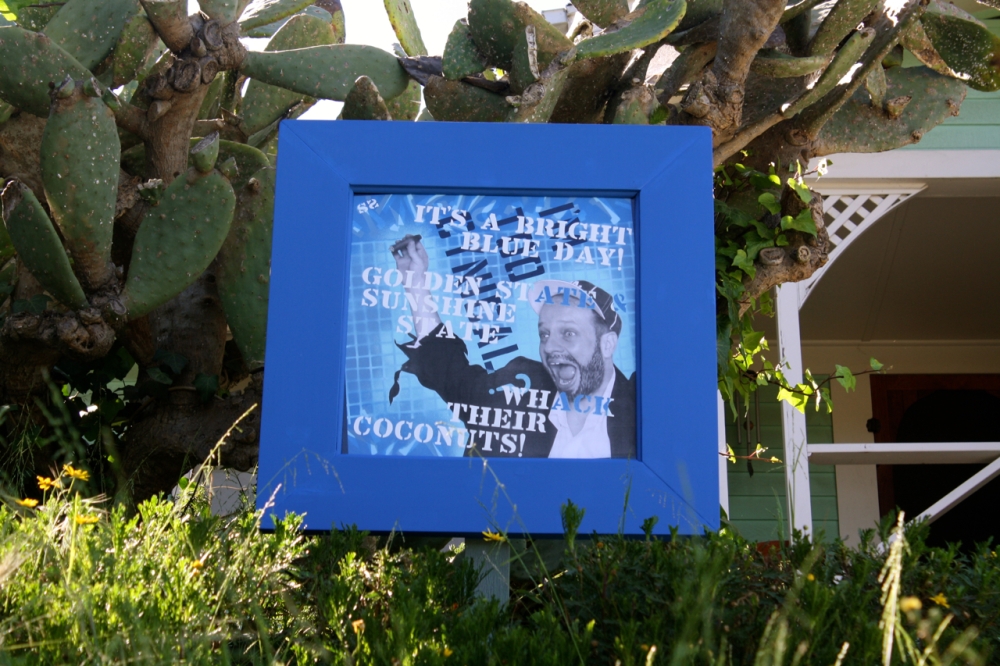 My current series of paintings, the L.A. Blue Bum series, evolved out of an ongoing project I started in 2007 in which I write haikus with a baseball (specifically Dodger baseball) theme and make a painting out of them for display in my front yard in Echo Park. Whereas the earlier pieces featured witty observations on America’s pastime, the newer paintings are far more complex, with layers of meaning for the viewer to discover. To symbolize the historical significance of the Los Angeles Dodgers, who are struggling through difficult times right now because of the owners’ divorce and financial uncertainties, I have resurrected a character from the past, the Brooklyn Bum first illustrated by the great Willard Mullin. Just as Mullin’s Bum symbolized as well as satirized the boys from Brooklyn, my reincarnation of the character, the L.A. Blue Bum — as personified by actor Joe Walters — roots for the boys in the Ravine while at the same time commenting with sometimes scathing candor on their follies and triumphs. But just as baseball, as American as apple Pie, has an ugly underbelly of drug use and greed, underlying the L.A. Blue Bum paintings are observations on the darker aspects of contemporary American society. (All Blue Bum paintings are aerosol enamel and latex on masonite.)

THE STORY OF THE BLUE BUM

I was born April 9, 1913, in Flatbush … Brooklyn, New York. We lived in a tiny basement apartment on Bedford Avenue, near Ebbets Field, where the Brooklyn Dodgers played. From the day I was born, all I ever wanted was to cheer on the local ball club. It wasn’t easy, especially during the Great Depression. I saw some hard times, and my Dodgers did too. In the summer of 1937, I became a de facto mascot of “dem bums.” Some days, we played good, but most days it was a battle. We finally get a pennant, and those damn Yankees beat us in five. It’s “wait ‘til next year” once again. But then, boom! World War II. Our best boys go off to fight.

We had a shot in 1951, but it wasn’t as good as Bobby Thomson’s shot, so the Giants, the only team I hate more than the Yankees, took our place in the fall classic. It’s not until 1955 we finally beat the Yanks in the World Series. A sweet victory indeed!

But the joy didn’t last long. The Dodgers owner had sold Ebbets Field out from under us. I fell ill September 24, 1957, the last day baseball was played at the old park. Then the ax fell, hard! On October 8, word came that my beloved Dodgers were packing up and leaving town. Not just to another borough, mind you, but all the way to Los Ange-leez, California. Brooklyn would never be the same. That night I died of a broken heart.

They buried me over at Washington Cemetery, where I’ve been resting in peace for more than 50 years. But on the cold night of November 1, 2010, the unthinkable happened, something so horrible it caused the earth to shake in Brooklyn. The hated Giants had won the World Series, and my Dodgers 22 years away from their last trophy! I started spinning in my grave until my coffin broke out of the earth and I clawed my way free. My boys needed me!

I hitched rides across America and found a little room in an old house near Chavez Ravine. I was happy to see a few familiar faces around the stadium: Don Newcombe is still as dapper as ever, and that red-headed squirt, Vin, is still calling the plays. I feel better already!

I’m the Blue Bum, and I’m back for my boys in blue, the best ball club on Earth. I’ve got a lot to say, both good and bad, about baseball and life and everything in between.